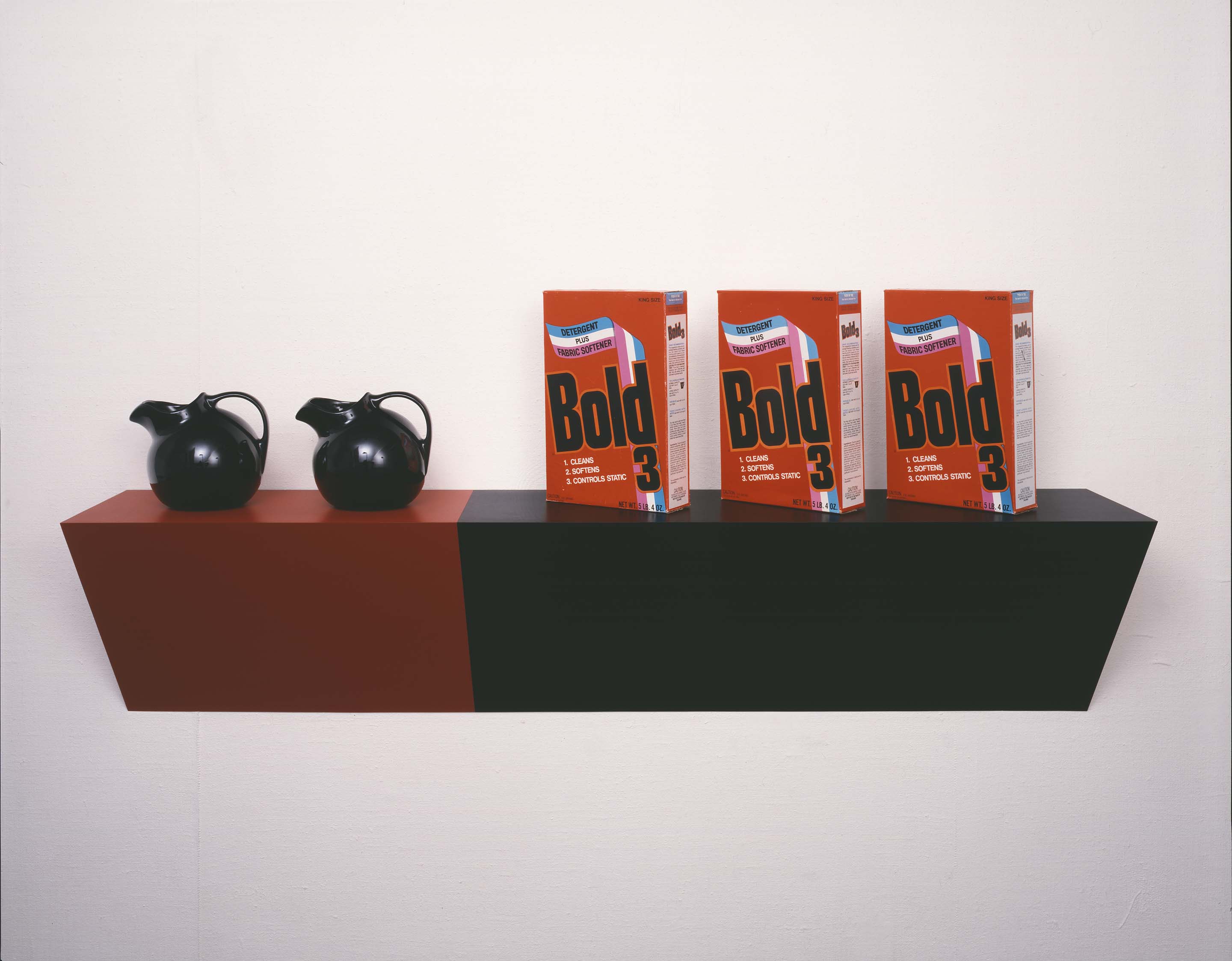 When Gorney’s gallery opened, Vaisman was running International With Monument, the gallery at the center of the collecting hysteria then sweeping the area. The people who showed there and at two other artist-run galleries, Nature Morte and Cash/Newhouse, had little in common with the graffiti artists, whose raw, streetwise, often overtly political work the East Village was known for. Their art was cool and calculated, with a cynical edge. Combining Conceptualism’s intellectual pretensions and Pop Art’s infatuation with consumer objects, they created avant-garde objects as a commodity. Extending the joke to the limit, they then sold these objects to eager collectors who took this mockery as artistic high-mindedness.
As the stakes got higher, artist-dealers like Vaisman got out of the gallery business, and Gorney ended up doing the selling. Sonnabend – a gallery that rode the first wave of Pop and Conceptualism in the sixties – got Ashley Bickerton, Peter Halley and Jeff Koons, the stars of International With Monument, after a much-ballyhooed group show in 1986 (New York, November 19, 1986). But Gorney picked up Otterson, Nature Morte co-founder Pater Nagy, photo artist Sarah Charlesworth and Tim Rollins +K.O.S. (Kids of Survival), a collaboration between a lover Manhattan Conceptual artist and a group of “learning disabled” teenager in the South Bronx. Gorney shares Vaisman with Sonnabend and Leo Castelli, and shares Haim Steinback, a commercially successful sculptor who arranges consumer items on wedge-shaped shelves, with Sonnabend as well. [Frank Rose on Jay Gorney]

“In any event, the neighborhood was always welcoming to people who defined themselves as artists of any sort, so in the era of amusing fakery it was ripe for exploitation as an artful copy of itself. Reagan was president, Communism was dead, and the idea of doing anything that didn’t make money had begun to look ridiculous to most people. For a few seasons the storefront gallery became the most commonly opened business, followed by the offbeat boutique and the precious little restaurant. The normative style of art featured in the storefront galleries was “neo-expressionism,” of a type that suggested the artist was a wild and crazy misfit, tortured by inner demons, and so forth. Often these paintings depicted emaciated, punky-looking guys with their limbs twisted and bleeding from stab wounds, and when you saw the middle-class white kids making this art, mostly good-looking boys of about twenty whose parents lived in Greenwich, you had to laugh. The most visible galleries and the constellation of proper names emerging from them made up a neat little package of prefabricated angst, something that appealed to a media notion of artists as tantrum-prone infants gifted with uncontrollable, oracular powers—which, when you think about it, wasn’t far from the romantic bohemianism that the neighborhood’s still-obscure, slightly more indigenous artists tended to live by. But it was all rather thick, a kind of mannerist posturing, like someone selling you a vividly decorated used car, and among these very young artists, there was a desperate competitiveness, almost a panic, that the gravy train was passing through just this once and you had damned well better hop on it….
I observed most of this from a certain distance, so I couldn’t really tell you who, among the neo-expressionists, turned out to be talented and who ended up as space debris. The East Village galleries that I followed in a serious way—Nature Morte, Jay Gorney, 303, Pat Hearn, Cash/Newhouse—showed Conceptual and photo-derived work that didn’t have the East Village playpen effect. Some of it was probably just as ephemeral in its own brainy way, but it was closer to my taste. There was definitely a struggle for dominance going on between the East Village neo-expressionist trip and the neo-Conceptualist faction, something about “instinctive” versus “intellectual,” and socially, too, the two camps were quite distinct, though the precise details of this have fallen out of my memory. It happened that somewhere in the middle of the East Village phenomenon I became the art critic at the Village Voice, so for three years I had to look at all the art being shown (which became not unlike having to attend a Shriners convention every weekend) and cope with suddenly being hustled by every imaginable and unimaginable person. I became, I think, completely dissociated from the social life this job required me to have, and I remember almost nothing about it. I just remember being very happy when it was over.” [Gary Indiana on the East Village art scene]

“The 80s was a mix of everything, some stuff you knew was going to be great, and a lot of dross that was being hyped up and promoted.
In a way, it seemed arbitrary, but pretty soon, you got to know what was really interesting. There was a thread of like-minded people pursuing the same arguments. The same aesthetic. Reading the same stuff, from Baudrillard and Bomb to the New York Post. On the outside, it seemed like a deluge of impressions: Malcolm Morley, Samizdat, Imants Tillers, Gracie Mansion, Tompkins Square, vogueing, Wigstock, the Life Café, Phillippe Thomas, IFP, Ange Leccia (beau), Brighton Beach with Anja von Bremzen and John Welchman. Orshi Drozdik and Patrick McGrath. Jay Gorney. International with Monument. Patricia Field. Glenn OBrien (best man at wedding), and Barbara Egan, with Jan Avgikos, as the inner circle. Susan Hapgood. Anita Sarko. Johnny Sex. Visits by Terry Atkinson. On the inside, it all made sense, a kind of irony about art and its most internal convolutions.
In the mid-80s, there was the art scene in the East Village, still the seed for the contemporary art world. Peter Nagy with Nature Morte (and Alan Belcher), Jay Gorney, Gracie Mansion, Colin de Land (friend), Pat Hearn. International with Monument. My editors, Ronald Jones and C Magazine, Richard Martin at Arts Magazine, Stuart Morgan at Artscribe. Dinner with Sherrie Levine, bowling with Richard Prince, Lisa Spellman, and John Ahearn. The advent of the Picture Generation post-Concept art, and the work of Haim Steinbach, Ashley Bickerton, Meyer Vaisman, Peter Halley, Jeff Koons, at Sonnabend Gallery. ” [Cornelia Lauf and Daniela Salvioni on the 1980s EV] 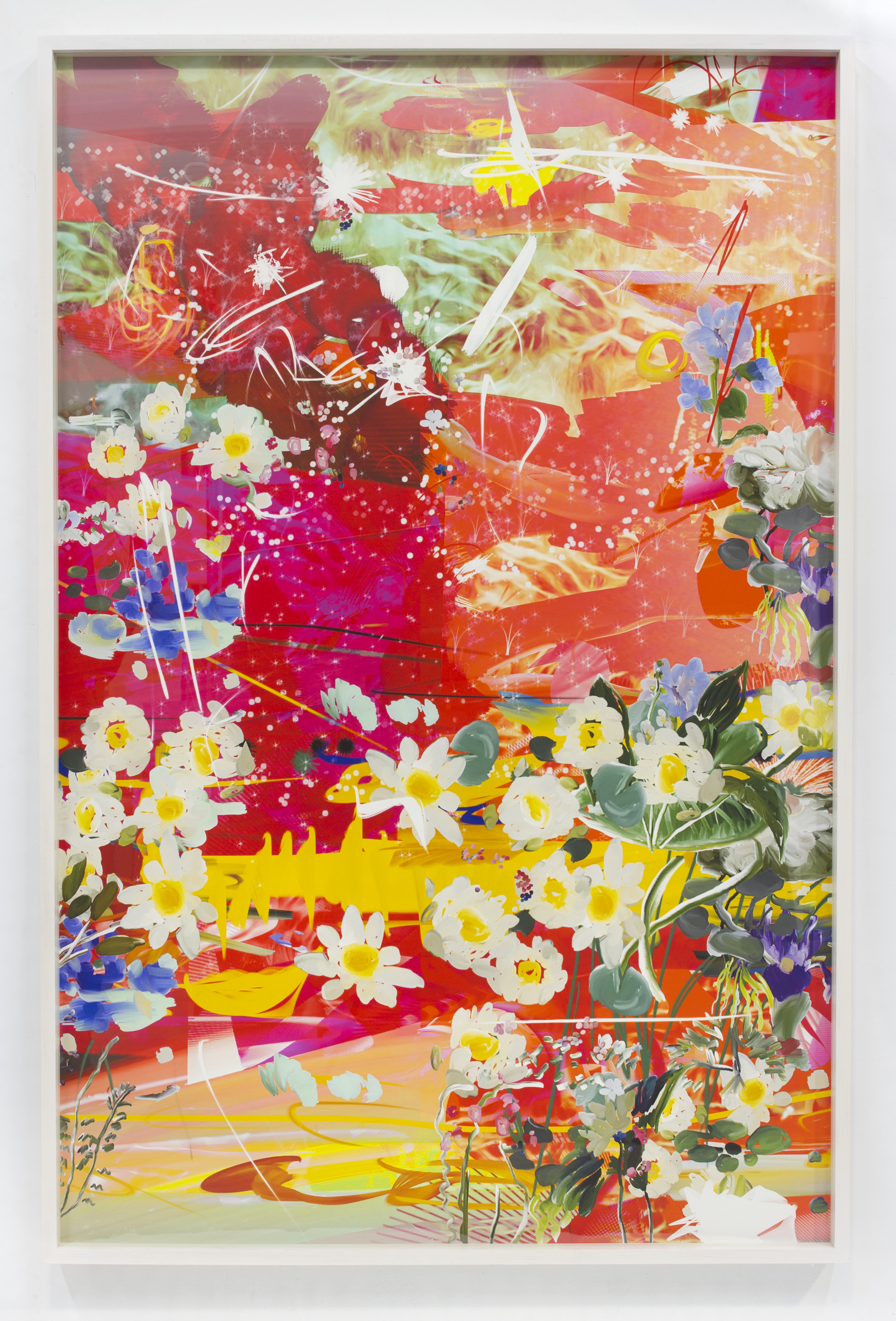 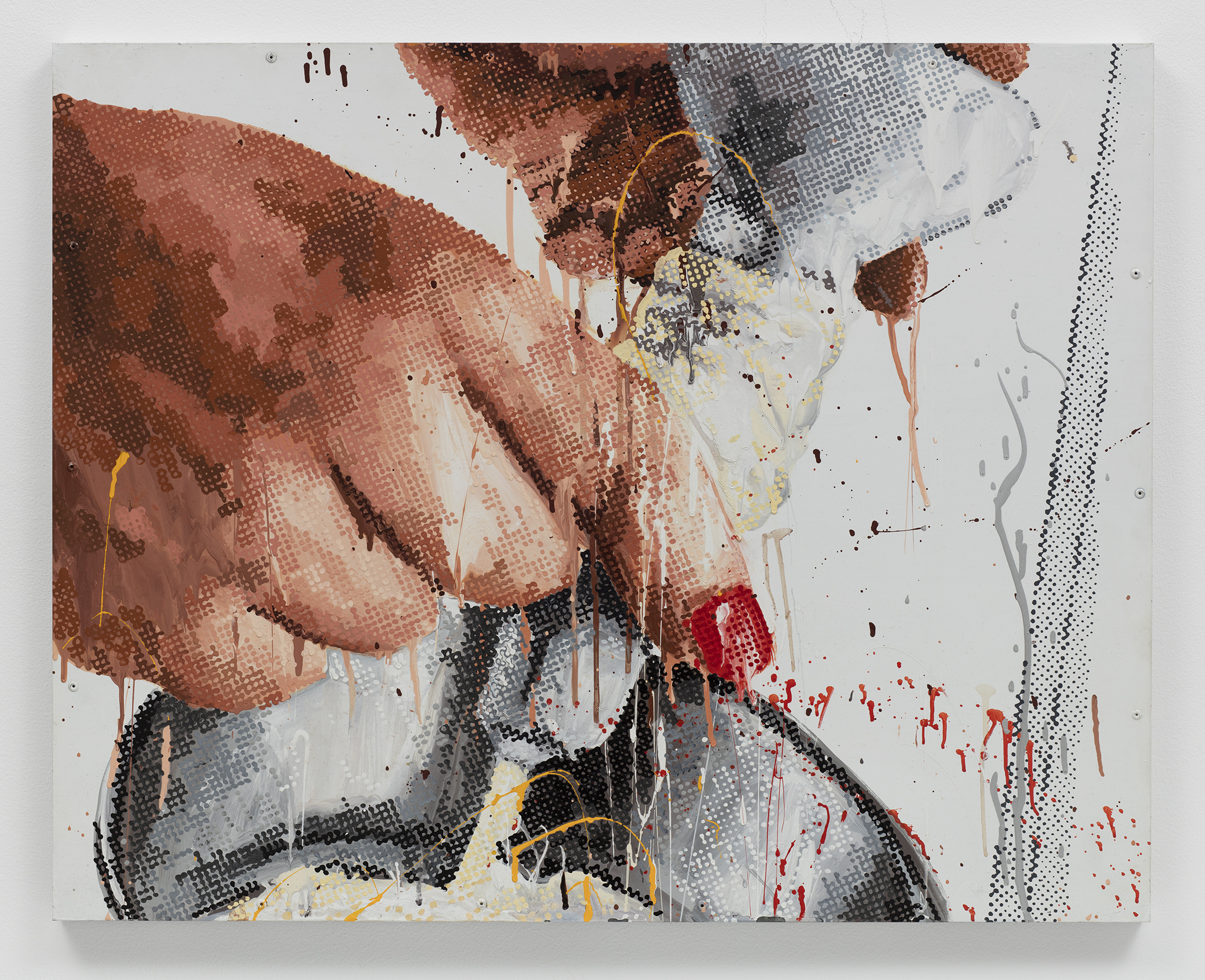 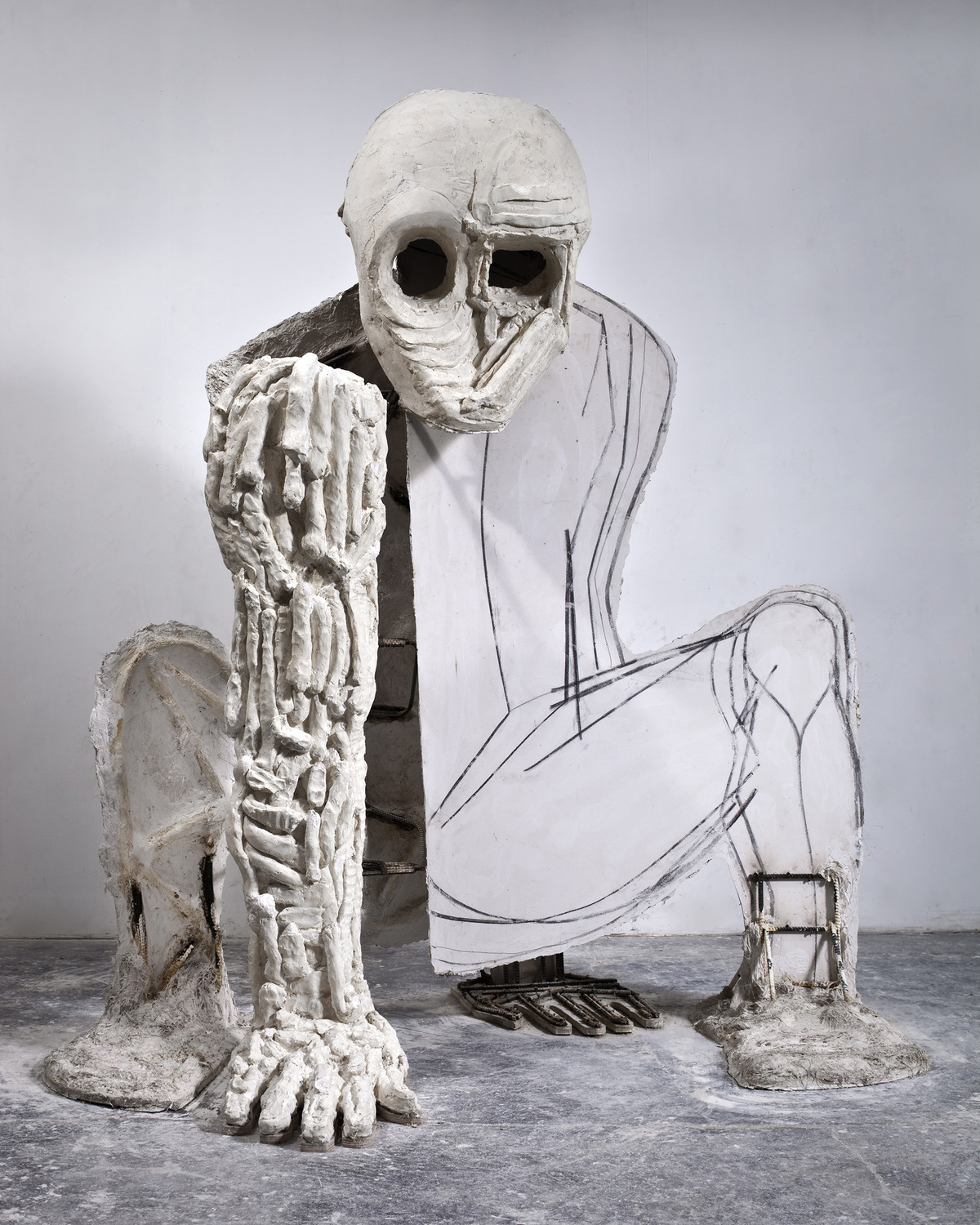